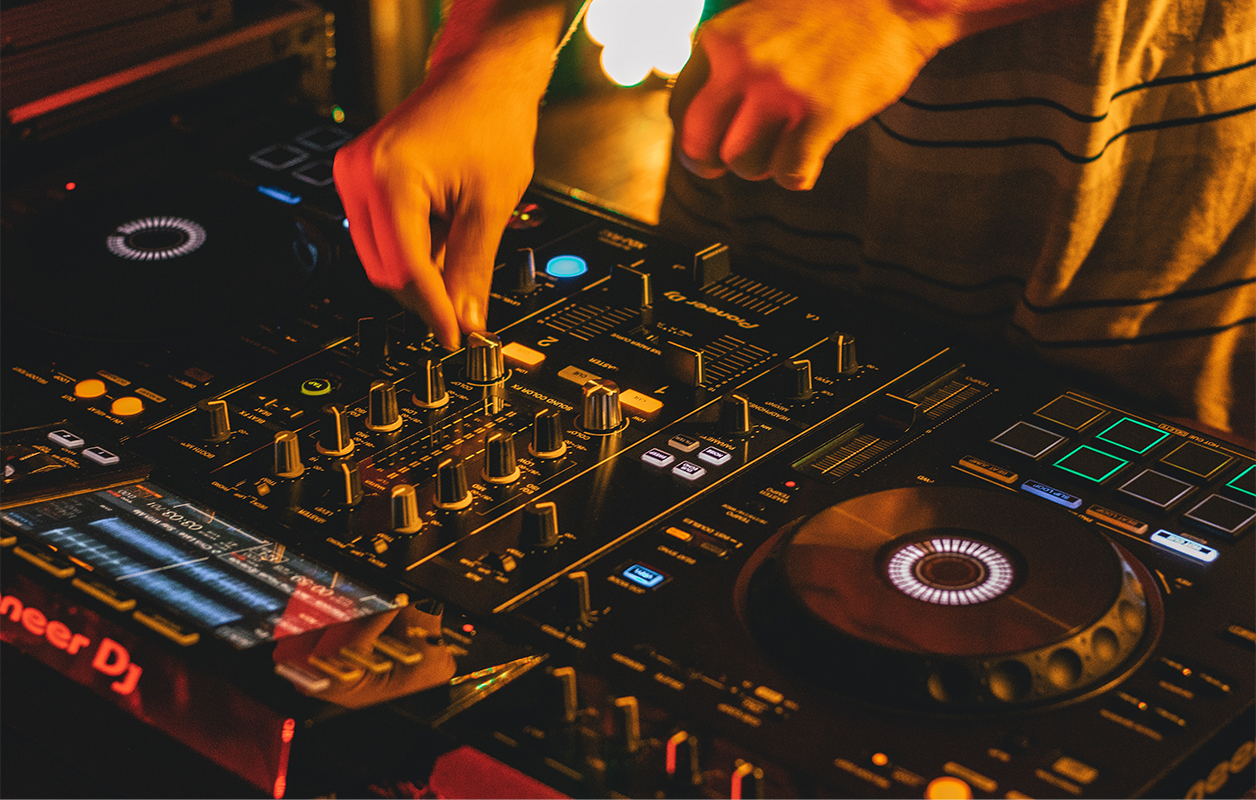 DJ effects animate and color your mixes. They help create smooth and exciting transitions between songs. They keep each song sounding new and exciting every time you play it. Understanding the DJ effects at your fingertips can greatly enhance your DJ sets and allow you to become a real-time producer and remixer.

Most DJ equipment and software programs allow you to easily select from and use a wide array of effects. For example, in Serato, there is an “FX” tab at the top of the screen, and when you click on it, there is a drop-down menu of effects for the three knobs on each side of your controller or CDJ. On your controller, there are typically three knobs on either side of the deck, as well as an ON switch for each knob. Once you load the knob with an effect, you can toggle the effect on and off, as well as turn the knob to increase or decrease the amount of the effect.

Here is a list of DJ effects you can use to enhance your set:

The echo out effect repeats the last beat or section of a song while simultaneously fading out that song. This effect is perfect when you transition from the current song to the next. It smooths out the transition and makes it less obvious and abrupt.

To use echo out, load the “echo out” effect into your knob and turn the knob all the way on. Keep the ON/OFF switch off until you are ready to trigger the effect. Once you hit the ON button, let the song naturally fade out. Don’t forget to turn the echo out effect off when you cue up your next song.

Like echo out, the echo effect repeats the last part of a song. The main difference is that the song continues to echo indefinitely unless you manually decrease its volume. If you combine the echo effect with a volume fade, you will get an echo out effect. You can also use the echo effect to create variation in a song or to emphasize a certain phrase or sound. You can choose different lengths of a song to echo, for example just the last beat, or the entire last measure.

The reverb effect simulates what you hear when a sound bounces around in a large room or hall. It creates a distant and underground sound. This effect is great if you want to add drama to a song or create variation in a long instrumental section. It is also great to apply to your current song right before you transition to the next song. It makes the current song sound like it is fading into the distance.

Add the distortion effect if you want to make your sound harsher and edgier. Distortion sounds much like the overdrive effect in an electric guitar.

Much like the number of pixels in a photo, musical tracks have a sample resolution that defines the level of detail you hear in the song. Low-resolution songs tend to sound more distorted and less pristine than high-resolution songs. The bit crush effect reduces the resolution of your track to distort, transform, and simplify your track in interesting ways.

A repeater effect does just that–repeats parts of a song. The difference between a repeater and echo is that the part of the song duplicated by the repeater effect sounds exactly like the original signal.

When you hit the braker effect, your track will stop. It will sound like you literally put the brakes on your vinyl record. Adding the braker effect is a good way to end a track and transition to the next, or to stop your set entirely for a speech or at closing time.

These are just a few of the common DJ effects at your fingertips. It is good to experiment with the amount of an effect you put over a song, as well as where in the song you choose to apply the effect. There are the usual ways in which these effects are used, but feel free to use them in any way you want. If it sounds good, then keep doing it. Effects allow you to be a live music producer while you are spinning, so it’s a great opportunity to let your creativity shine!

Anna Awe is a DJ, producer, and singer/songwriter based in Los Angeles, CA. She is passionate about helping DJs and artists use entrepreneurship and digital media to pave their own paths in the music industry.